If you love your dog, protect him. It’s a really small price to pay for the companionship of a pet.

Heartworms are easily preventable Pets become infested with heartworms when bitten by a mosquito carrying immature parasites picked up from another animal. Once in the bloodstream, the parasites migrate to the heart and mature into worms that can cause heart and lung failure. Dogs are most susceptible, but cats and ferrets can also be infested.

A pet with heartworms can be treated, but the cure is difficult, expensive and sometimes fatal. This is one case where prevention is much, much better than the cure, which is why heartworm prevention is so important. The American Heartworm Society estimates that 27 million dogs are not on preventive medicine,  leaving them at risk for this deadly disease, which is present in all 50 states except Alaska.  Click here to see a map of heartworm incidence in the Veneta, OR area.

Heartworms (Dirofilaria immitis) are a fairly large worm, up to 14 inches long, which in adulthood lives in the heart and pulmonary arteries of an infected dog. Dogs acquire this infection through mosquito bites as mosquitoes readily pick up larval heartworms from infected dogs and carry them to new dogs. Some geographic areas have severe heartworm problems while other areas have little or none. Let’s follow the worm’s life cycle:  Inside the Dog 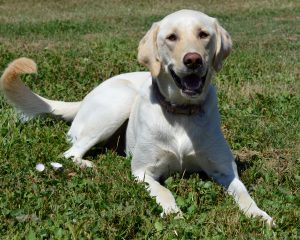 The adult heartworm prefers to live not in the heart, but in the pulmonary arteries. It swims into a cozy tubular artery, where it is massaged and nourished by the blood coursing past it. In the pulmonary arteries the worm’s presence generates a strong inflammatory response and a tendency for blood to inappropriately clot. This can result in pulmonary embolism (blood clots going to the lungs) and bleeding tendency such as nose bleeds. A form of non-infectious pneumonia (pulmonary eosinophilic granulomatosis) can result from excessive infiltration of inflammatory cells into the lung in response to the parasite.  If enough worms are present the heart must work extra hard to pump blood through the plugged up arteries.  Fluid may accumulate in the chest and abdominal cavities, leading to a pot-bellied appearance and/or difficulty breathing.  When the heart muscle begins to thicken (as any over-worked muscle will), it may not conduct electrical impulses normally. This means that the pumping/filling rhythm can be disrupted and an arrhythmia may result.  Arrhythmias can lead to sudden death.

If the worm infection is heavy (over 25 worms for a 40 lb dog), the worms begin to back up into the heart’s right ventricle (the chamber which pumps blood through the lung). The worms take up a significant amount of space within the heart, space that should be filled by blood. With less blood going through the heart, there is less blood being pumped out to the lung.  When over 50 worms are present, the ventricle is completely full and the atrium, the chamber receiving blood from the rest of the body, begins to fill with worms. When over 100 worms are present, the entire right side of the heart is filled with worms and there is very little room for any blood to be pumped. This drastic phenomenon is called “Caval Syndrome” and most dogs do not survive it.

With adult male and female worms present in the dog, mating begins to occur. Heartworms do not lay eggs like other worm parasites; instead they give live birth and the baby worms are called microfilariae.  Microfilariae are released into the circulatory system in hopes that they will be slurped up by a mosquito taking a blood meal and carried to a new host. Microfilariae may live up to two years within the host dog in whom they were born. If, after this period, a mosquito has not picked them up, they die of old age. Microfilariae may also be transmitted across the placental barrier to unborn puppies if the mother dog is infected with heartworm. It is important to realize that such puppies will not develop adult heartworms or heartworm disease from these microfilariae; in order for a heartworm to reach adulthood, it must be passed through a mosquito.  Parasitic worms have 5 larval stages and are termed L1, L2, L3, etc. Heartworm microfilariae are first stage larvae: L1.

Inside the mosquito the microfilariae will develop to L2, then L3, the stage capable of infecting a new dog. How long this takes depends on the environmental conditions. In general, it takes a few weeks. A minimum environmental temperature of 57 degrees F is required. The process goes faster in warmer weather.

When a dog is bitten by an infected mosquito the L3 larvae is deposited in a tiny drop of mosquito “spit” adjacent to the mosquito bite. For transmission to occur there must be adequate humidity to prevent evaporation of this fluid droplet before the L3’s can swim through the mosquito bite and into the new host.

Once inside the new host the L3 will spend the next week or two developing into an L4 within the host’s skin. The L4 will live in the skin for about three months until it develops to the L5 stage. The L5, which is actually a young adult, enters the blood vessels and migrates to the heart and out into the pulmonary arteries approximately 5 to 7 months after first entering the new host.

Note: All commercially available heartworm preventives act by wiping out the freshly delivered L3’s and the L4’s living in the skin. The ivermectin products are also able to kill the younger L5’s. Also note: because the heartworm tests on the market either look for microfilariae or for adult worm proteins, they will not detect infection with immature worms. This is why it takes 5 to 7 months from the time of exposure to get a valid heartworm test and this is also why there is no point in testing puppies less than 5 to 7 months of age.

Do Cats get Heartworm?

The answer is an unequivocal yes but the feline situation is vastly different from the canine situation. While it is true that the feline infection is not as common as the canine infection, the feline infection has recently been found to be a much more widespread problem than previously believed. In the past, a common statistic was that within a given geographic area, the feline heartworm infection rate was approximately 10% of the canine infection rate. Recent research indicates this is not so; in heartworm endemic areas, the incidence of feline heartworm infection rivals or surpasses that of feline leukemia virus or feline immunodeficiency virus. An incidence of 2% to 14% of all cats has been reported for endemic areas, making heartworm a concern for any cat living where there are mosquitoes.

The cat’s immune system is extremely reactive against heartworms. For this reason, it is virtually impossible to detect microfilariae in an infected cat. (The cat’s immune system removes them too quickly.) Also, symptoms of infection tend to be more immune-related than heart-failure related. Cats develop more of a lung disease, complete with respiratory distress and chronic coughing or vomiting. Feline heartworm disease is often misdiagnosed as feline asthma. Sudden death may occur just as it may occur in infected dogs.

In cats there are two phases where the disease can exert symptoms. The first is when immature worms reach the lung and pulmonary arteries, as early as 75 to 90 days after infection. Even small worms are inflammatory and disruptive to the circulation. Cells of inflammation infiltrate the lung and interfere with the cat’s ability to breathe. The second phase where problems can occur is when the worm dies. Since cats are not the natural host for this parasite, most immature worms that make it to the lung are killed. The presence of the dead worm is extremely inflammatory. (Imagine your body trying to remove or digest the dead body of another animal inside your lung and circulation!)

The effects of this kind of widespread inflammation can reach far beyond the lung and circulatory system. The kidney can be affected as well as the gastrointestinal tract and even the nervous system.

Heartworm disease is primarily a lung disease in cats, not a heart disease.