We are proud of our family at Echo Hollow Veterinary Hospital. We take patient care very seriously and we want you to know your pet is in good hands. Our Licensed Technicians (‘Nurses’), Receptionists and Assistants have decades of experience between them and they also understand what it feels like to be in your shoes. We know you like to see a familiar face when you come through our door, and someone that is genuinely interested in helping you care for your pet.

Dr. Bruce Behrends grew up in Oregon, went to school in Oregon, and never thought twice about living anywhere else.  He started his career working at the Veneta Veterinary Hospital back when they saw ‘all creatures, great and small’.  If you catch him on a slow day, he has some great stories to tell about those middle of the night farm calls.  Over the years, he decided to focus his energies on small animals and creating a veterinary hospital that serves the needs of our community.  He is now part owner in the Echo Hollow Veterinary Hospital. 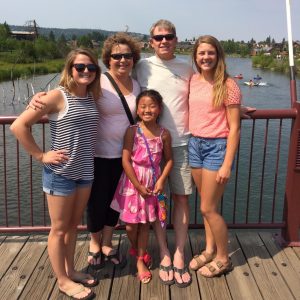 Dr. Hoffmann did her undergraduate work at OSU and received her veterinary degree from Washington State University in 1980 with the intention of going into equine medicine.  Upon graduation she married Andy, a fisheries biologist, and moved to Alaska (where there are a lot of fish but not many horses).  Dr. Hoffmann became a small animal veterinarian and mother of 3 children.  In 2004 the family relocated to Oregon to escape 8 months of winter and so Dr. Hoffmann and her 2 girls could better pursue their equine interests.  Her daughters and she continue to train and compete in the equine discipline of eventing.

Dr. Hoffmann’s other passion is Christian Veterinary Missions.  She has gone on a number of short-term mission trips and currently makes regular trips to Uganda, Africa and some native Eskimo communities in Alaska. 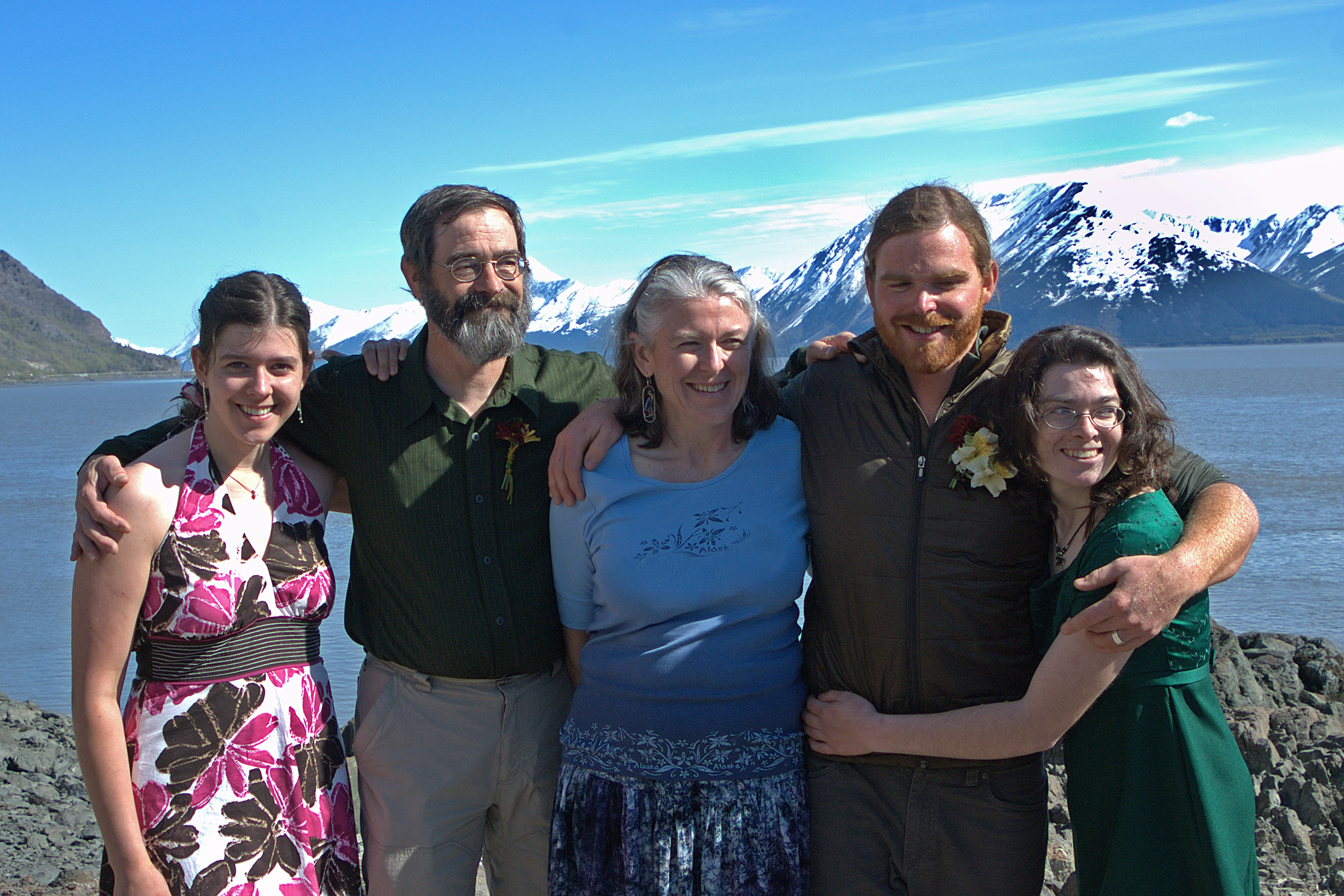 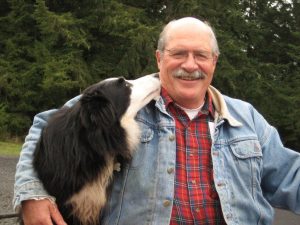 I am a born-and-raised Oregonian, so I never realized how great the people were here until I moved away. We spent a few years in Eastern Pennsylvania after school, and enjoyed our proximity to the history, culture and diversity of this country.  But suburban PA wasn’t sure what to think of rhubarb instead roses, and laying hens in the backyard.  One day, a reporter called me to get comment on a new city law to ban poultry.  It was then I found out we were the only permitted owners of chickens (in a city of 75,000).  They were gracious enough to ‘grandfather our birds in’, but I could tell I didn’t quite fit in.  I must say that Oregon has been more understanding since we’ve been back.” 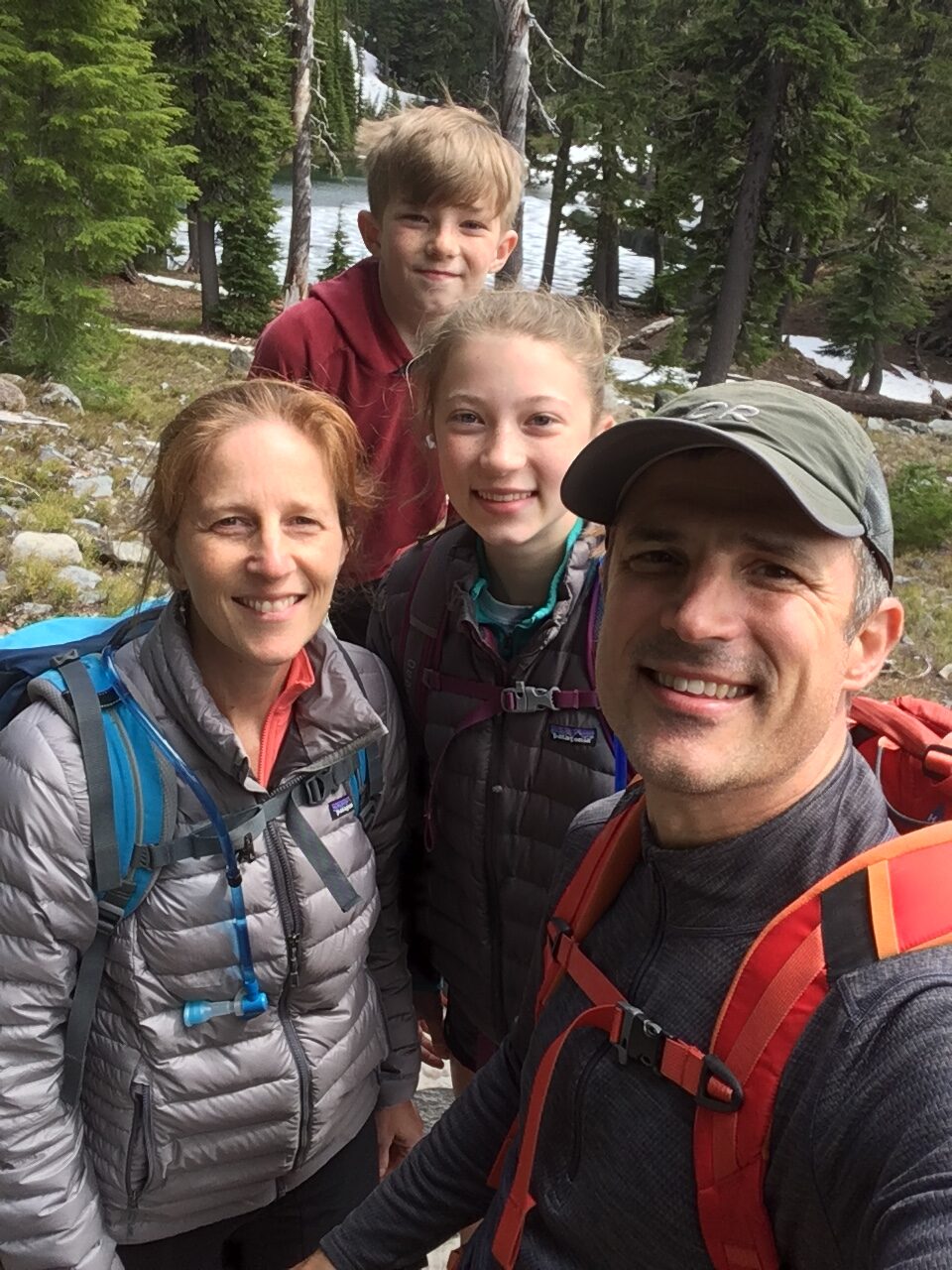 Dr. Paul Schiffgens has been working with our hospitals since his graduation from Oregon State College of Veterinary Medicine in 2012. Having grown up in Maryland, he moved here in 1996 to attend the University of Oregon where he received his bachelor degrees in International and Environmental Studies. He fell in love with the area and has called it home ever since. After undergraduate school, Paul worked for several seasons on local organic farms before setting his sights on Veterinary Medicine.

Though it was a passion for large animals that originally sparked Dr. Paul’s interest in Veterinary medicine, it is the care for our client’s smaller pets that continues to feed the fire.

Paul, with his wife and children share their house and property with three cats, Pider, Pippi and Mimi, and one Australian shepherd, Luce (pronounced Lucy). Dr. Paul hasn’t stopped caring for large animals all together; he continues to do so by caring for his family’s small flock of Gotland sheep. He and his family also tend to an ever changing assortment of fowl and small mammals.

When not working, Paul can also be found in his garden, tending to one chore or another, or otherwise knee deep in a project or activity with his family. 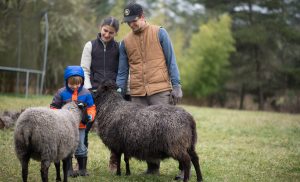 Dr. Srch-Thaden is a true Oregonian. She was raised in the Klamath Basin where she enjoyed watersports, became a nationally ranked figure skater, and participated in a multitude of 4-H projects. Life as a military wife took her around the world including Japan, Europe, and Australia. She studied Marine Biology at UNC-Wilmington and was a professional aquarist at the National Aquarium in Baltimore.

She returned home to earn her DVM from Oregon State University and her research has contributed to many aquatic animal health programs including beach renourishment in the Carolinas, restoration of Oyster Reef Habitats, and creating a blood test for Sea Star Wasting Syndrome in the Pacific Northwest.

Dr. Srch-Thaden’s interests outside of medicine include showing dogs, dance, and traveling. She also enjoys many watersports of the liquid and frozen variety, including scuba diving, surfing, wakeboarding, kayaking, and snowboarding, as well as spending quality time with her family and friends. 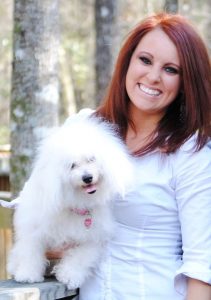 Dr. Kenna was born and raised in Southern California. After completing a Bachelor of Arts in Psychology, she realized that her true professional passion was for medicine and animals. She started her veterinary school at the University of Glasgow in Scotland. After completing a semester there, she transferred to Ross University in St. Kitts. Dr. Kenna then went on to complete her clinical year at Texas A&M. She received her Doctorate of Veterinary Medicine in January 2007.

Dr. Kenna has practiced veterinary medicine in the Eugene and Cottage Grove areas for the past 12 years. She enjoys working with clients and their pets. In her free time, Dr. Kenna loves to hike, run, kayak and spend time with her family including her 2 labradors. 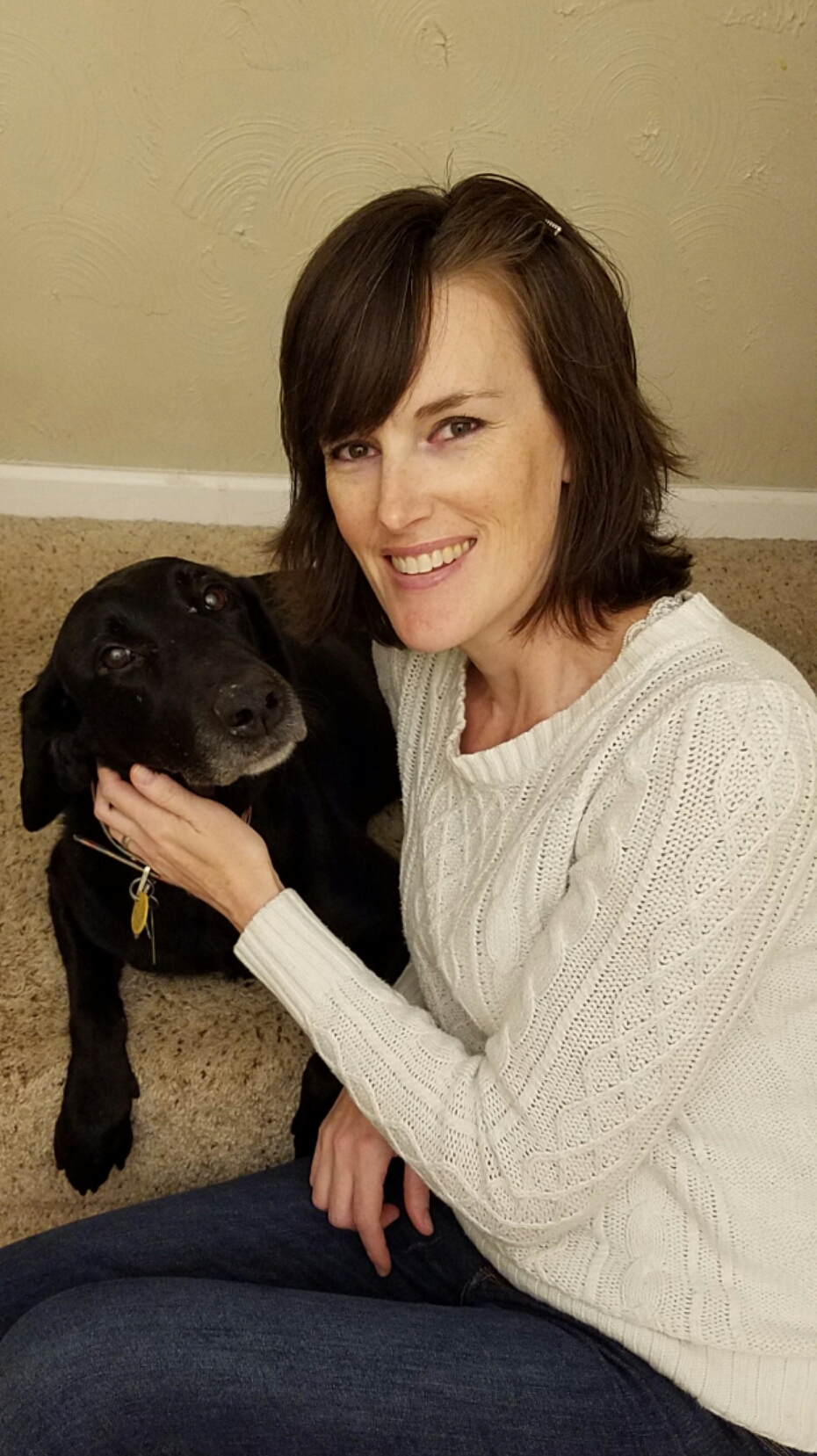 Dr. Harmon earned degrees from the University of Oregon and Oregon State University. This means she loves the Ducks and the Beavers! Originally from Northern California, she moved to Eugene for school and met her now husband Johnny – a true Oregonian. She has been around the world, but knew the Pacific Northwest would be her forever home. During her travels, she helped to organize a veterinary clinic on Ometepe Island in Nicaragua. Veterinary students staffed the clinic to help local animals with spays, neuters and much needed dental care.

Dr. Harmon spends her free time outdoors camping and kayaking with her husband and nephews. She also enjoys the Pacific Ocean by spending time whale watching with her family in Waldport. Dr. Harmon has a small farm where she loves to spend time with her three dogs, two silly goats, a stubborn old horse, three elusive felines, two hilarious guinea pigs and a 30 year-old, grumpy fish “Boss Hog”. 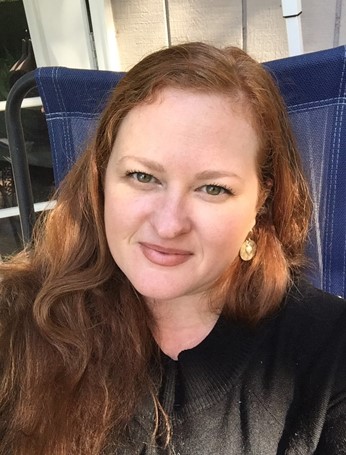 Dr. Link was born in the Pacific Northwest and has lived here her whole life. Her undergraduate studies were completed at Oregon State University and then she went on to achieve her DVM from Oregon State as well. She graduated in 2017 and practiced medicine in the Corvallis area for 3 years. In her free time she enjoys spending time outdoors and particularly enjoys hiking. She also enjoys reading and spending time with her 3 cats. 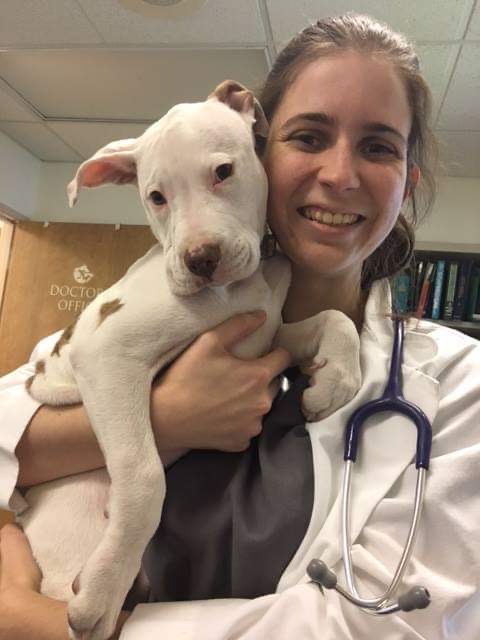 Dr. Gildersleeve is a native of Baton Rouge, Louisiana.  He grew up sailing the Gulf of Mexico and Lake Pontchartrain, playing club soccer across the South, and caring for his beloved pet dogs.  He graduated from Loyola University New Orleans with a Bachelor of Arts in Writing, but spent his free time assisting veterinarians at a local hospital and the thoroughbred racetrack.  These experiences inspired him to pursue a career in veterinary medicine at Louisiana State University.

Dr. Gildersleeve held the coveted position of veterinary student caretaker for LSU’s tiger mascot, Mike VII, for two and a half years. He is passionate about small animal medicine and surgery, and looks forward to a career dedicated to serving people and their pets. When he’s not at work, he can usually be found hiking and camping with his black lab, Molly. 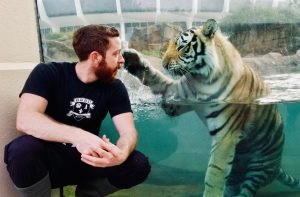 Dr. Shaw is originally from Washington state, earning a Bachelor of Science degree in Biology from Western Washington University.  Upon entering the veterinary field first as a volunteer at a local clinic, she immediately knew that veterinary medicine would be a lifelong calling.

While earning a degree in Veterinary Medicine from Oregon State University, Dr. Shaw came to admire the beauty of the Willamette valley and surrounding communities. Having lived in both Seattle and Spokane, she was very interested in relocating to an area with more trees and less traffic, and western Oregon quickly became home.

Outside of the workplace, Dr. Shaw dedicates her free time to a rambunctious dog and sheep, as well as a longstanding interest in fine arts and related hobbies. 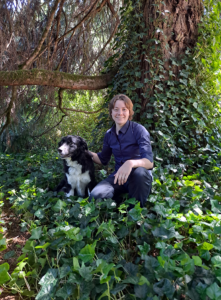 We are happy to accept resumes for those interested in being part of Echo Hollow Veterinary Hospital and Urgent Care.