Most people know to keep chocolate away from the dogs, and that cats shouldn’t drink antifreeze.  But what about chewing gum.  Sounds pretty harmless, right?  Maybe not. 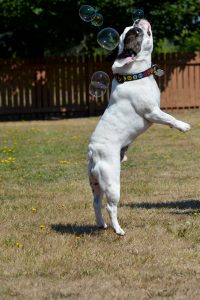 Some chewing gums contain the sweetener xylitol, which is toxic to dogs and cats.  A single piece of sugar free gum contains about 0.3g.  That means a 40 pound dog could start to have problems after only 7 pieces.

What’s wrong with a little sweetener?  The sugar regulating system of dogs doesn’t know what to think of xylitol.  It tastes good, so they eat it.  The body sees this as a surge of sugar, so it releases more insulin than usual.  Insulin brings the blood sugar down, but it doesn’t function on xylitol.  So we actually see a dangerous drop in blood sugar – hypoglycemia.

Common symptoms of hypoglycemia are weakness, lethargy, collapse, or even seizures.  The treatments need to be started immediately, and include supporting the blood sugar with IV therapy and trying to stop the absorption of xylitol.  Unfortunately, that isn’t the worst part.  One study found that over half of dogs that ingested a toxic dose developed liver failure soon after.

So check the label on that sugar-free gum or candy.  If it has xylitol, keep it away from the pets.